The Full Monty: Getting Naked in the Name of Art

When I first came up with the idea for this year of challenges, I knew that getting naked had to feature somewhere. I seriously considered streaking, but decided against adding 'be arrested' to my list of new experiences.  Instead, I offered myself up as a nude model for a couple of life drawing classes. Alas, it transpires that you can't just wander into a studio and get your kit off. First of all, they want you to sign up to the Register of Artists' Models, which costs money. Then they want you to audition. Audition?! I think very much not. Forget it. No way I was getting naked to see if they wanted me to get naked. What if they DIDN'T want me to get naked??? That was the end of that idea.

Then 2013 dawned, and with it the last four-odd months of challenge time. I thought long and hard about what I hadn't yet done that I really wanted to do, and posing nude was top of the list.  Gazing across the fully-dressed landscape of my comfort zone, I saw the tantalising shores of butt-nakedness looking peachy-keen. If no life drawing classes wanted me, I would just have to set up my own. So, without thinking about it too much, that's what I did.

I booked a studio at the Islington Arts Factory, emailed their resident tutor, Eamon Kennedy, and set about recruiting some artists. I'm lucky enough to have a lot of very creative friends, and I put out a facebook and email call for anyone who fancied drawing. I asked the people who said 'yes' to bring along others if possible, so that I wouldn't be naked in a room entirely peopled by my friends - somehow that seemed more intimidating that a room full of strangers. In the end I had about twelve people on the list, and Eamon had kindly agreed to come and lead the session, which was a huge relief. I was anxious that the artists should get something out of the experience, and that seemed far more likely with a professional in the room. I (correctly) predicted that I would be far too nervous to do much in the way of organisation on the day, and we didn't want a naked amateur fussing about like a clothes-less chicken.

Over the next three weeks I did my very best not to think too hard about the impending doom. It had seemed like such a very good idea, but was I really going to do it? Take ALL my clothes off in a room full of people? Most evenings, when I undressed for bed, I had a go at posing in front of the mirror. Mere seconds was all it took for absolute mortification to set in. Then it got worse. I was talking to a couple of friends about it, and the subject of "grooming" came up. Whole new can of worms. They were both bare down there. Help! Is this normal? Don't answer that. Let's just say that there are limits to the things I am prepared to undergo in the name of art.

The night before was probably the worst. I had intended an early night but instead stayed awake until gone one in the morning, in a sort of reverse of the old Christmas adage that the sooner you go to bed, the sooner Santa will arrive. Let's face it though, not even Mrs Claus wants to see Santa naked. 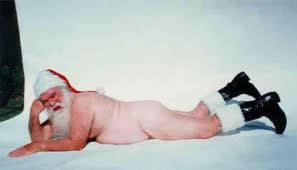 The day dawned. I performed a final buff and polish during my morning ablutions, and got dressed without underwear to avoid unsightly marks. A professional in the making, I'm sure you'll agree. When there were no more excuses for staying at home, I shuffled through the rain to the Arts Factory, a former church. There, I was shown to a worryingly cold studio. WORRYINGLY COLD. And worryingly empty of anyone except me. My worst nightmare was about to come true. No one wanted to see me naked. Not even the professional life drawing teacher wanted to see me naked. Oh god. Is it because I'm not bare down there? I was about to get undressed in front of twelve empty easels, and sit there like a sad, naked lemon.

Then my cousin Daianna arrived. Crap. People did want to see me naked. Damnation.

In the end, six wonderful people showed up. The other six fell victim to the vagaries of bad backs, sickness, and kidnapping (well, sort of.) Or maybe they just didn't want to brave the rain for the dubious privilege of sketching my - admittedly perky - bosoms. Fair enough.

I knew five of the artists personally, and am immensely grateful to them for their support. Special thanks goes to Trish though, for being the token stranger in the room. Fortunately, Eamon also turned up, and was absolutely fantastic. Not only was he token stranger number two, he was also (not by design) the only man present. I must just take a second to say that he teaches a regular Wednesday evening class at the Islington Arts Factory and that you should all go to it if you can.

Eamon - a professional and very successful life model as well as a teacher -  put a lot of effort into explaining the subtleties of posing nude. This was wonderful because as long as he was talking, I still had my clothes on. He is passionate about figurative drawing and inspired us all with his enthusiasm. I was more than a little tempted to suggest that I stay on the papery side of the easel and he do the posing. The papery side of the easel looked super cozy, and significantly warmer than the plinth.  If you take a look at the picture to the left, you will notice a heat lamp on the wall. You will also notice, thanks to the distinct lack of red glowy bits, that said lamp is not on. We couldn't make it go on at all. No amount of switch flicking would encourage it. Until the end of the session, when I was dressed again. Then it came on with a vengeance. Perverse bastard of a heat lamp. Excuse my French.


Then the moment came when I absolutely had to get properly naked. Look, here I am properly na...

Yeah right! You didn't think I was going to commit my wobbly bits to a photograph, did you? And then publish it on this blog? Just think what would happen when I became a famous novelist. People would stop focusing on the writing amidst the furore caused by the discovery that I had once featured in some mild artistic erotica. No siree.

So, the big moment. I was standing on the plinth, in my dressing gown, in a freezing room, pretty damn nervous. My friend Davina piped up with a well-timed "don't worry, we've all got them." "What, these?" I replied, shedding my robe in one swift movement. That was it. I was nude. I assumed a contrapposto and did everything I could not to burst out in fits of uncontrollable giggles.

Then a twenty minute sitting pose that helped me learn the true meaning of pins and needles.


Then another twenty minute lying down pose. Not, I think, the most elegant moment of my nude modelling career.

Then a ten minute sitting pose. And then they'd had enough of me and made me get dressed again.

Aside from the 18 minutes of hell after I realised how painful pose number three was going to be, the time flew. I very swiftly forgot my embarrassment at being naked and became far more aware of the fact that I was seriously cold. I loved listening to the swish of the charcoal on the paper, and to Eamon's gentle narrative of advice and commentary. Strange snippets of song flitted through my mind, as did lines from various poems. At one stage I was just counting to six over and over again. It was a remarkably peaceful process. Almost meditative. There are so few moments in this modern life where total stillness becomes one's sole aim. I felt extremely tired afterwards, but very happy, and so grateful for the support of the seven people who gave up their Sunday morning and braved the rain to come and draw me. Lucy even took her drawings home and worked on them some more. Here's the finished version of the sketch shown above. I think it's beautiful:

Here's Lucy's other finished creation, which I think is BEYOND beautiful. I really love this one.

Since Lisha Rooney's photographs of the session are also insanely beautiful and moody, here are a few more of them: 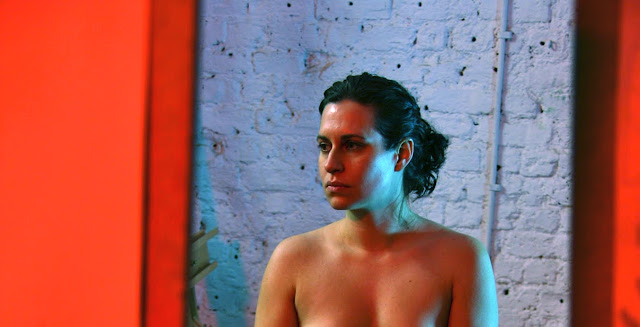 In the end, the idea of public nudity was far more frightening than the act itself. The act itself actually felt very natural. As Eamon said, we have learnt to cover ourselves up, and to be embarrassed by the sight of nudity, but after today I feel that there is something innocent and almost pure in the act of putting your naked self on display. Whilst I don't feel the need to do this again, and wouldn't necessarily seek out the experience, I would certainly pose for someone if they asked me. Maybe not in winter, mind...

I received enormous encouragement around this task, and I'd like to share a couple of the messages that came through afterwards:

It's the hang ups people have with themselves, but doing shows you are extremely comfortable with yourself. The person behind the paper is also nervous, but the human body is the best thing for an artist to observe, always has been always will be.

Doing the sketch class was really fun & loosened me up a bit. And you were an awesome model!

Just being in that environment today lifted my spirits - the objects, the materials, the smells, the artistry. If ever you had/have body issues, lose them now.

Hope you enjoyed it and felt beautiful. You were.

I did feel beautiful. And grateful. And not nearly as far out of my comfort zone as I was expecting to be. So look out next time you're at the rugby/football/international lawn bowls, I might be up for streaking after all.