Hup Hup and Away!

Occasional weekend cycle rides take me to the outer circle of Regent's Park, where along with enjoying a peek at the giraffes, I have often craned my neck at the crazy people learning flying trapeze above a whopping great net. You can probably guess what's coming next... 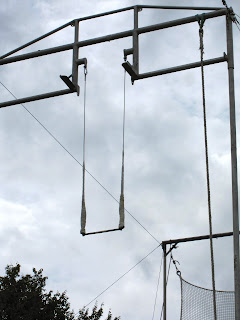 Heights are not exactly my thing. Sweaty palms, mild dizziness, a dry mouth and a racing heart are par for the course on bridges, aeroplanes, cliffs and roller-coasters, the last of which I avoid at all costs. I regularly have to have stern words with myself to keep this anxiety under control, so putting myself somewhere high seemed like a fair challenge for my 30@Thirty.

Gorilla Circus runs outdoor classes throughout the summer, and for the royal sum of £23.50 pretty much anyone from the ages of eight to 78 can have a go at flinging themselves off a very narrow platform some 40 feet off the ground. 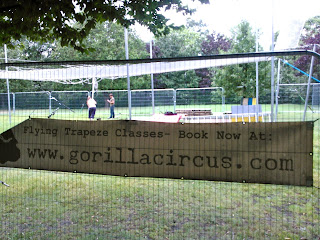 Not sure I wanted to go alone, and having been informed in no uncertain terms that my beloved was not interested, I called on my trusty friend Julia. Seeing as how she conned* me into doing a triathlon, and has now somehow hoodwinked me into signing up for a FREAKING HALF MARATHON (what is wrong with me, will I never learn?) I figured she wouldn't have the nerve to turn me down. It was, however, something of a Phyrric victory, as she predictably took advantage of the fact that we were meeting to squeeze in a training session for the run beforehand. Needless to say that when we arrived at Regent's Park at 11am my face was still the same attractive scarlet colour as my trousers.

*OK, she didn't actually con me, but she did promise me there would be lots of old people on ancient push bikes, which there weren't. 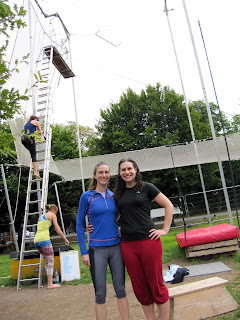 There were ten people in the class - eight girls and two guys - all of us beginners. There were three instructors, the main one of whom, Debs, was wearing something very sparkly and circus-like under a vest top and exercise trousers. Score. 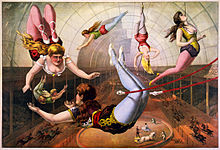 We commenced with one of those consent forms that inspires terror and makes a particular point of asking for an emergency contact number. I love those things. Then, before the warm-up, there was a safety briefing consisting of three essential points:

1) Don't walk under the net.
2) All will be well if you do as you're told.
3) If you walk into one of the ropes, or the metal stakes buried in the ground, you've been warned, and we will laugh.

The warm-up comprised a lot of arm-swinging and shoulder-rolling. I am happy to report that both Julia and I passed that test where you have to swing one arm forward and one arm back. Things were off to a promising start. Next came a quick demo on the low bar, where we were shown the correct grip; Thumbs go under the bar, unlike in gymnastics, where thumbs go above the bar. We were then shown the move of the day, the 'Knee Hang' which does exactly what it says on the tin. It involves bringing your legs up through your arms, hooking your knees over the bar, pointing your toes, and releasing your hands. Simples. Of course, if you're not a super-fit athlete with abs of steel (which I am not, by the way, just in case you had the wrong impression) it ain't so easy to do this from standing. So we were given an elegant heft by Debs, and assured that once swinging it would be a lot easier.

Next came the safety belts, and a quick explanation of what happens up on that platform. Up until this point, I had managed to pretend that the whole platform bit wasn't going to happen, but evidently it was. Julia had somehow managed to volunteer to go first (over-achiever that she is) and therefore provided us all with an elegant demonstration of the position to assume up there. This is it: 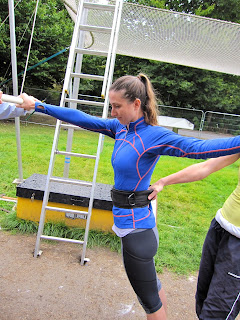 So, left hand clinging for dear life to a pole on the platform, right hand reaching out for the bar, which is being held by the person whose other hand is holding on to your belt and stopping you from plunging to a certain and painful death. I mean, dropping gently into the net. I tried not to think about this too much.

A demonstration preceded our first attempts, and was useful not just as regards seeing the moves in action, but also in order to see how instructions are called from the ground. One of those achingly cool young dudes* who looked like he was probably born attached to a surfboard was in charge of keeping the trapeze moving should you not be a natural swinger, and also slowing your descent.

*The fact that I just wrote the words "young dudes" makes me hang my head in shame. When did I get so old??

He called the instructions too, and they go something like this:

Ready (this means, bend your knees).
Hup! (this means, jump gently from the platform, keeping your arms straight).
Legs over, hook the knees.
Hands off, nice big reach.
Hands back up.
Legs off.
And swing forward, swing back, tuck and release. (This means, do a backflip off the trapeze. I kid you not).

This what these instructions mean when you don't follow rule number two, above (all will be well if you do as you're told).


Ready (this means, stand immobile for several seconds, until the person holding on to your belt reminds you to bend your knees).
Hup! (this means, bend your knees a few more times, as if you're going to jump, but don't. Finally, find your bottle, jump).
Legs over, hook the knees (this means, try several times to get your knees over the bar. Maybe fail).
Hands off, nice big reach (this means, if you managed the above, take your hands off. Take your bloody hands off you chicken!)
Hands back up (self explanatory, and a very happy moment. Pretty much everyone managed this bit).
Legs off (reverse the legs up bit, probably with about as much elegance).
And swing forward, swing back, tuck and release (this means all sorts of weird and wonderful things, including tucking your knees up but forgetting to let go of the bar, letting go too soon and landing on your face, or swinging bank and forth several times and then just hanging there like a lemon).


Anyway, perhaps I'm getting ahead of myself here. What happened after the demo was this. Julia climbed the ladder, and my palms started sweating.

Julia then followed the instructions like an absolute pro, jumping from the platform almost without hesitation and hooking her knees over with serious style, first attempt, her ponytail streaming behind her in the wind. All she needed was the sparkly leotard... Why-oh-why did I have to bring the high-achiever along? When it came to the backflip dismount however, she proved herself human after all, managing an interesting if not entirely orthodox move I like to call the 'what exactly am I supposed to be doing now? Or right, here's the net.'

Then someone else went, and as they started, I had to climb the ladder for the first time.

This is where it all went a bit hazy, as my initial gung-ho attitude started to suffer from a serious case of vertigo. The ladder seemed to go on forever, and when I finally got to the top, things were significantly worse. Standing on a platform about two feet wide, I had to have one of those stern talks with myself. What was going to happen to me, for goodness sakes? At the very worst I was going to look a bit stupid before I fell into the very bouncy net. And yet, and yet...

You have to put your toes right to the edge and then push your hips forward over the abyss. You have to have absolute trust that the instructor has you by the belt, and that you're not going anywhere until you choose to obey that Hup! and launch yourself into the unknown. You have to control your breathing, and tell yourself to be brave. You have to - and this is really difficult - LET GO of the pole and put both hands on the trapeze. 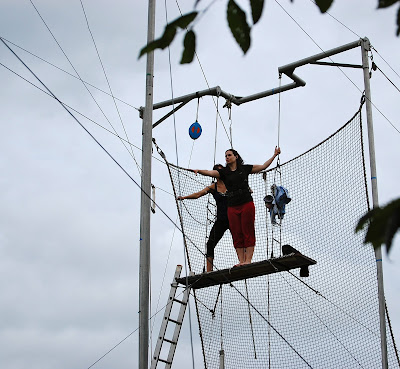 That's the worst moment, hanging there, fighting every instinct that tells you to lean the hell back and climb down the ladder. Waiting for an instruction that you're just not sure you can obey.

And then, with a dash of courage, you're FLYING. You're actually flying through the air, almost as if you knew what you were doing. The rush, for me, was instantaneous, even though I was concentrating with all my might on following the instructions. Even though it took me two attempts, I got my knees hooked, I took my hands off, I reached, I put my hands back, I unhooked, and, miracle of miracles, I swung forward, swung back, tucked and released. Yes, backflip-tastic. What a feeling!


Alas, the fact that it took me two attempts to get my knees hooked meant that I wasn't allowed to try for the move where you are caught by someone else on a second trapeze. Guess who was? Please note the devastating lack of a star next to my name: 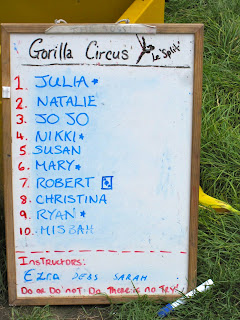 Julia performed the catch with her usual aplomb, to great cheers from the assembled crowd (me), a superstar to the last. I was disappointed in myself, but on my final attempt managed to get my knees over first time, thus ending on a high, and with that niggling feeling that I might just have to go back and have another go. And, frankly, my backflips only went from strength to strength. 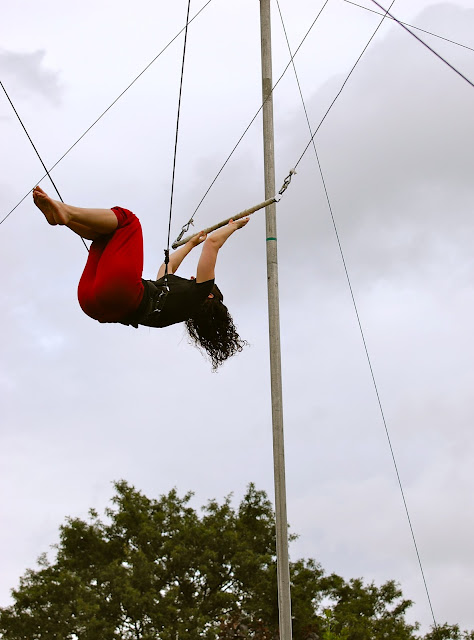 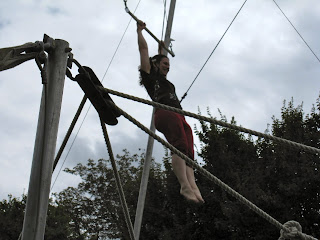 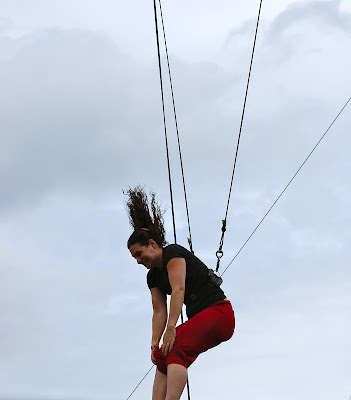 I highly recommend fighting the fear and having a go at flying trapeze. I may have been afraid, but I always knew that I was in safe hands, and that the instructors weren't going to ask me to do anything genuinely dangerous. And, as always, obeying the Hup! - which comes in many forms over the course of one's life, it seems - reminds me that I'm alive. Just remember: 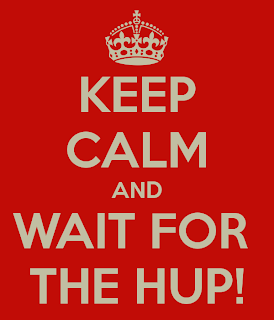 Seven down, twenty-three to go...